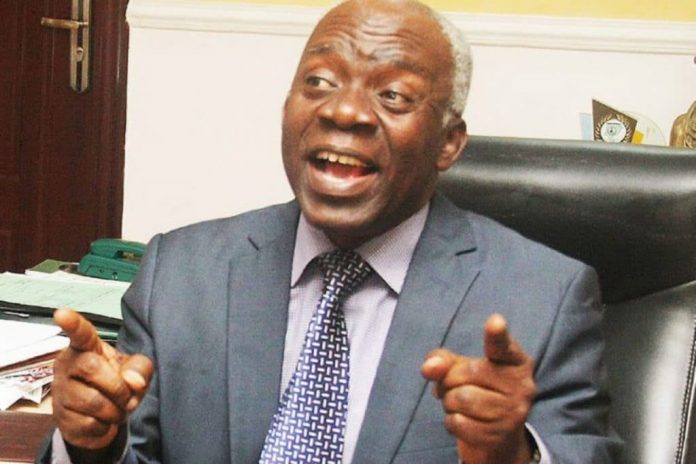 Femi Falana has said family members of Lekki Shootings’ victims are afraid to speak out.

Falana (SAN), a constitutional and human rights lawyer, has said family members of those affected by the Lekki toll gate shooting have refused to speak about the incident.

The senior lawyer claimed that the families refused to speak “because of the environment under which we operate”.

He stated this while speaking at a virtual #EndSARS meeting organised by Omoyele Sowore, publisher of Sahara Reporters, on Wednesday.

Falana who stated that the military is “known for lies and deception”, recalled how the Nigerian Army allegedly covered up the reported killing of 347 Shi’ites in Zaria, Kaduna state, in 2015.

Soldiers had reportedly opened fire on the Shi’ites during a procession at a time the convoy of Tukur Buratai, chief of army staff, was passing.

Although the army claimed few Shi’ites were killed in the incident, the Human Rights Watch (HRW) and a panel set up by the Kaduna state government said the casualties were more than 300.

“Nobody should believe the military, it has a history of lies, fraud and deception,” Falana said.

“Just in December 2015, the same chief of army staff claimed there was a traffic jam in Zaria and the big man wanted to move.

“And because of that traffic, he got soldiers from the first division in Kaduna to mow down hundreds of Shi’ites. And what was the explanation? That the Shi’ites wanted to assassinate the chief of army staff, and so his boys had to save him and in the process, they repelled these Shi’ites who had guns and about six or seven people died.

“But in a commission of enquiry set up by the Kaduna state government, we were told that indeed, 347 Nigerians were killed by the military; no autopsy, no postmortem, nothing whatsoever.

“Their bodies were taken away in the dead of the night and given a mass burial. And people will ask you, ‘if anybody lost his child in Lekki, why can’t they come up?’ Who has come up in the case of Zaria? Because you must understand the environment under which we operate.”